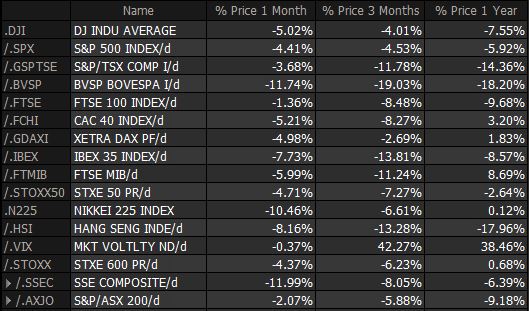 Looking at the table above comparing the 1 month, 3 month and 12 month results – the overall returns look a little different, but still not a great result.

Often we see some weakness early in January, following the “xmas rally”. Though this year may be different to any other year in recent times. We have the very immature Chinese market going from boom to bust on a daily basis, the constant underlying instability in the middle east and record low prices on just about every commodity.

Leading the chaos is Oil.

Jan 19 (Reuters) – Unseasonably warm weather and rising supply will keep the crude oil market oversupplied until at least late 2016 and could push the price below its current 12-year lows, the International Energy Agency said on Tuesday.

The addition of Iranian supply to a market where production looks set to outpace consumption for a third year in a row could not come at a worse time for crude oil exporters, who are grappling with prices at their lowest in more than a decade.

Brent crude futures LCOc1 have fallen to their lowest level since late 2003, tumbling below $30 a barrel, after OPEC said in December it would not cut output to halt the price slide despite global oversupply.

The IEA, which issues regular reviews of the health of the energy market, said more price weakness could lie ahead as a result.

“Although we do not formally forecast OPEC oil production, in a scenario whereby Iran adds 600,000 bpd to the market by mid-year and other members maintain current output, global oil supply could exceed demand by 1.5 million bpd in the first half of 2016,” the agency said in a monthly report.

One thing that we can count of for 2016, all the doom and gloom of lower commodity prices, will subside – somewhere, one day this will just become the new normal.

Providers of all commodities will restructure their businesses to adjust to lower income or they will stop producing. The key for investors is not to be on the wrong side of the line. Investing in any commodity at the moment is a pretty risky strategy. There is loads of money to be made (and lost).

The underlying losers in this oil price war are the alternative energy producers, the lower the cost of oil – the harder it is for any alternate technology to grab a foothold.

If there was any genuine relationship between oil prices (per barrel) and the price we pay at the pump, a lower oil price would actually be stimulatory for our economy. Somebody in the fuel chain in Australia is cashing in on low oil prices – but it certainly isn’t the consumer.